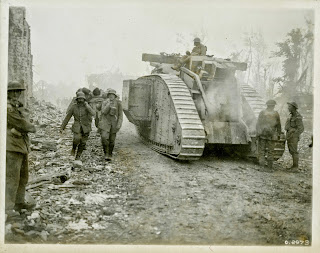 Captured German soldiers walk past an idling British Mark IV tank during the Battle of Amiens
In the Footsteps of the British 4th
The year was 1918 and WWI had been fiercely raging for four years and casualties were mounting up in the millions from both the allied and enemy sides. After  the German offensive of 1918 the allied powers would strike back in what was called the Battle of Amiens. Over 15 miles of ground was gained by allied forces overwhelming the German troops at six to one.The S.S.A. would operate alongside the British 4th Army under the command of Sir Henry Rawlison. The team of twelve men would operate in several areas. Team two would operate one of the 2,000 British artillery pieces used behind the fighting lines while the other six members (team one) would follow along behind the joint British, French, and American forces advancing on Germany. The initial attack would take place on August 8th, 1918, there would be no shortage of casualties and action. It was the S.S.A.’s mission to protect and recover what men they could in a critical effort to return them to thair homes and families. Due to the fact that historical events such as this could not be altered in any practical way period weapons would be used except for a few modified items and armor. The attack would be devastating to the germans, the allied troops would equally suffer but the assault was necessary for the advancement of the war.
Posted by Iron Lion at 6:42 PM No comments: