"Protecting and defending the innocent and the weak is not a matter of preference, rather; it is a matter of duty".
~American Knight
Posted by Iron Lion at 3:15 PM No comments:

The Battle of Ameins Part III

As team three’s tank advanced on another pillbox an enemy artillery shell landed dangerously close destroying the right track of the tank. Now immobilized Feisty Fire’s crew would have to sit and wait until help arrived from teams one and two. At about this time teams one and two had met up at a field station and were just heading out to attend to more wounded when Feisty Fire’s distress call was received. Now with two missions on their hands the teams loaded up and doubled their pace. After attending to team three’s busted tank they headed back to the medic station taking in the fallen soldiers as they went.
The day ended with the allied forces and the Great Britain’s 4th Army gaining an impressive 15 miles past their starting point. The German troops numbered around 27,000 men of which 12,000 would surrender. While August 8th was a huge success the following days would not prove to be so quick. Despite this the attack had done its job putting the war in favor of the allied forces.The 2,000 British artillery, 800 aircraft, and 400 tanks used would prove to be invaluable in softening the enemy and pushing through their lines. Having done their job the S.S.A.  returned to the current time period with plenty of lessons learned and many a terror seen.
Posted by Iron Lion at 9:39 AM No comments:

"Fortitude is the guard and support of all
other virtues." ~ John Locke
Posted by Iron Lion at 4:07 PM No comments:

The Battle of Ameins Part II

On the morning of August 7th, 1918 the twelve man team would arrive at their designated time era and historical location in France in which they would prepare themselves for the upcoming attack the next day. Team one briefed with team two about the upcoming engagement then headed eight miles out to where the artillery units were set up and familiarized themselves with the other men they would be working with. The team would be operating the French built American designated M1918 155 GPF 155mm Field Gun. Their six man team would do their absolute best to operate the devastatingly massive gun and cause maximum damage to the enemy.Team one’s main objective was to provide calculated artillery strikes on visible targets which compromised team two’s objective thus covering their advancement. The second team would move up 5 miles from the drop point and station themselves just behind the British 4th Army where they also prepared using period weaponry. A French FT-17 tank, a Ford Model M1918 3-ton tank, and an empty flatbed truck were acquired for use the next day. Only two vehicles would actually be put to S.S.A. use. The French FT-17 Renault was internally covered with kevlar so as to provide just a little more protection while the flatbed truck would have to make do and follow behind the tank. The night was an uneasy one both for the allied units and the agents in the field.

The morning of August 8th came quickly and with it came the adrenaline and fear that would ensue. The gun crews began receiving coordinates for target areas while several miles back a massive strike force of 800 aircraft waited ready to devastate the enemy lines. When the time came for the artillery batteries to open fire the ground shook with their massive power. Team one manned their gun and when ready releasing 155 mm of explosive onto the target area. With every shot a cloud of dust rose from the ground as if a thunderstorm had come up from nowhere. After several minutes of bombardment the team adjusted their piece to the next set of coordinates. Again the 155 mm Field Gun joined the rest of the guns in their grueling bombardment. As the artillery crew’s part in the attack neared it’s end team two was simultaneously beginning their part in the battle.

Team two would later be joined by team one. It was estimated that a force of 20,000 German troops would be guarding the Amiens positions and resistance was expected. The attack on the German held lines began slowly at first but then mounted up speed as the day wore on,casualties were mounting but the allied forces pushed on.Team two did their best to pick up the wounded and made constant runs from the battlefield to medical stations. The two man FT-17 Renault advanced with the mainlines of allied forces running into plenty of conflict. Team two's tank, nicknamed "Feisty Fire" not only covered the flatbed and the wounded but also helped give the British infantry cover and fire support when approaching the deathly trenches. Feisty Fire took multiple hits to its frontal armor but to no avail, the little tank courageously charged into the sheets of on coming enemy fire only stopping to return fire with its deadly S.A. 18, 37 mm Puteaux gun. Mile after mile yielded the allies ground and left the injured and dead from both sides behind. Team two was nearly overwhelmed with their task.
Posted by Iron Lion at 2:13 PM No comments:

The following is a short. Please share and enjoy! 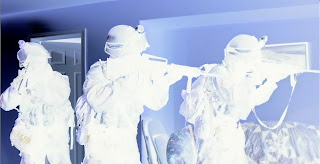 Hey guys, I come from a small and secretive tactical unit known as the S.S.A. While we usually file reports and mission data files I thought I'd just share this one with you as resent reports from our sponsoring nation indicate an upward trend of such events. We specialize in a variety of missions, from saving children from predators and human trafficking to preventing serious tragic catastrophes. On this particular mission we got a call out, it was the year 2002, this mission would be no ordinary one. In fact it was one of the more dangerous type. Mission briefing called for the services of a Catholic Priest. This sort of intermediary action is not something we have the skills for but fortunately protocol has us covered. Four kids, alone, in a suburban home somehow get hold of a Ouija board. For some reason or other the kids decide to mess with this thing. It takes us approximately 5 minutes to get from our drop zone to the inside of the house. By the time we reach the house and the room where the kids are at there is complete chaos. Before I continue I will describe our current state and defenses. All 12 of us are armed with fully automatic weapons as well as other backup weapons. We are typically kit out with ballistic and bio warfare protection aided by a state-of-the-art computer system able to detect, track, and warn of targets we may not see at the moment or be able to detect naturally. We're always decked in traditionally all-black equipment leaving for a formidable sight. Despite all this, we ourselves are not armed for what we were about to meet. Our priest is an on-call combat specialist from host-nation and frequently accompanies our team on such missions. By the time we reach the room we find two young girls who appear to be in shock while one boy yells helplessly at his friend who is now having a severe seizure. We decide to drag both girls, still dazed, to another room while attending to both boys. With six in the room and six others in the back room with the two girls we decide to act. The boys body convulsing severely must be attended to. We always operate in pairs so as to never be left fending for ourselves, but despite our digital system's countermeasures and sound suppression system there's no escaping the audible horrer and scream emanating from inside the home. Kortts, my wingman, is yelling at the top of his lungs as he discusses whether a sedative will alleviate or worsen one of the boy's conditions who has no collapsed on the floor and appears to be foaming at the mouth. A single sedative is administered with no ill or positive effect. Without a moment to lose and the situation grows ever more dangerous our priest makes his move. From this point we retreat from the room all of us sweating profusely. I remember my wingman ,Kortts, saying to me with exhaustion, "Di..Did I really just see that?" I shook my head unable to give a coherent answer. I remember thinking later, "why on Earth would this ever seem like a good idea for a kid, ugh, this is awful. "Several years later and much therapy and the kids are still shaken up. I hope no one ever finds it in themselves to mess with this kind of stuff.~ Tracer